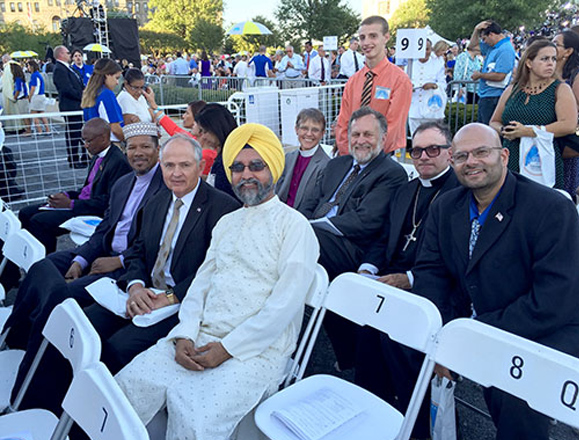 Leaders of the United Church of Christ were among a crowd of 25,000 people from a multitude of faiths who were on hand to hear Pope Francis during a Mass Sept. 23 in Washington, D.C., where they learned that good people can come together on difficult issues — such as immigration and climate care — even if they disagree on other issues.

“Pope Francis was greeted warmly by the thousands gathered outside the church,” said the Rev. John Deckenback, conference minister of the UCC’s Central Atlantic Conference. “At the end of a very busy day he looked tired, but there were glimpses of his warm affectionate smile as he led the service. The focus of his homily came from Mathew’s Gospel and emphasized the need to care for each other and creation as well.”

Deckenback was seated in the rows with representatives of the United Methodist Church, the Muslim society, the Church of Jesus Christ of the Later Day Saints, Hindu community, and Sikh community for a Papal Mass at the Shrine of the Immaculate Conception. 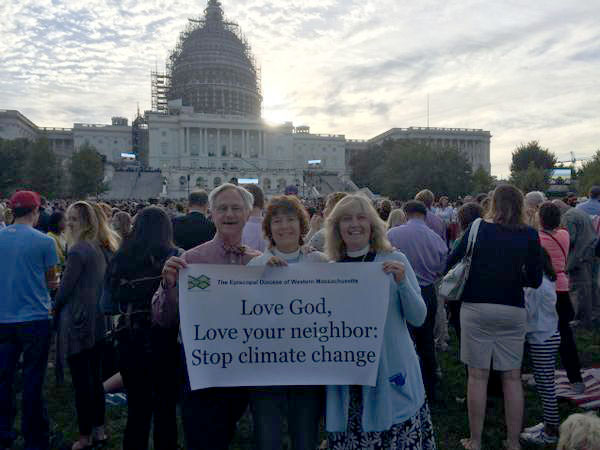 The following day, the Rev. Jim Antal, conference minister of the Massachusetts Conference, had a chance to attend the Moral Action on Climate Justice Rally at the National Mall, which took place as Pope Francis addressed a joint session of Congress on the need to act on climate change.

“The magnitude of the historic moment can be seen in the Pope’s arrival at the home of the most powerful man in the world,” Antal said, referring to the Pope’s visit at the White House. He also visited the State Department with a small coalition of religious climate leaders to meet with climate negotiators, and visited the offices of a few senators as a witness that people of faith have awakened to the issue of caring for creation.

“It’s way overdue for government leaders to realize what every religion teaches – that our responsibility is not only to ourselves, but it is to all who are alive today, along with all who are yet to be born and all of creation as well,” Antal said.

The Rev. William Barber, a Christian Church (Disciples of Christ) minister and leader of North Carolina’s Moral Monday movement, addressed the rally crowdand said, “We must choose community and care of the Earth over chaos and greed. Not only must we push to protect the Earth’s delicate climate balance, we must also challenge the social climate in which the poor live.”

At the Washington National Cathedral on Thursday, the Rev. John C. Dorhauer, general minister and president of the UCC, and the Rev. Otis Moss III, pastor of Trinity UCC in Chicago, were part of an interfaith gathering Thursday night, Sept. 24, to bring the faith community and climate supporters together.

At the White House, the Rev. Chuck Currie was among 15,000 people on the lawn who were invited by President Barack Obama and First Lady Michelle Obama to greet Pope Francis. He said there is common ground people of faith can share together for the betterment of humanity.

“I believe firmly that good people of good faith can come to different conclusions on difficult issues and still find common ground on other issues,” said Currie, a UCC minister and chaplain at Pacific University. “When we find that common ground, and climate change and fighting poverty are two issues where common ground clearly exists, we should work together in common cause.”

“Pope Francis is clearly a religious leader who sees the values in unity over conflict,” Currie said. “We should welcome that as we welcome him to the United States.”