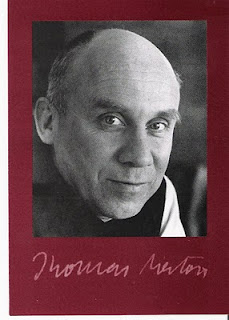 On the same day that I visited the Abbey of Gethsemani I also visited the Merton Center at Bellermine University in Louisville, Kentucky. While this meant short visits at both sites, you never know when you will be in the neighborhood again with such a purpose.

By its very nature a monastery is hardly a place for a focus on a particular personality. While there were many books by Merton in the gift shop, there was no other acknowledgement of him otherwise. The Merton Center could legitimately collect and examine Merton’s legacy. An impressive collection is Merton’s published work. Several editions, multiple translations to other languages helped me see not only how much he had written, but also how widely received he has been. The Center also has ongoing publications considering Merton’s continuing influence, and sponsors convocations of interested persons at intervals.

There are also photos that Merton took along the way. Some at the Abbey. Some taken on his trip to Asia.

There are photos of Merton himself, and also some of his family. One especially dear photograph is of his mother. 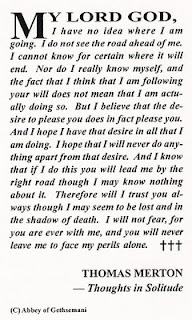 There is an impressive collection of quilts that bear Merton’s image as well.

The existence of the center, its activities and publications reminds me that there is a whole community out there, who along with me have found spiritual accompaniment in Merton’s writings. If you would like to see more about this please go to http://www.merton.org/

Below is a snapshot of one of the rooms at the center. 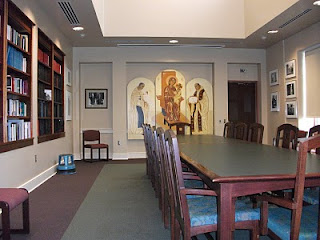