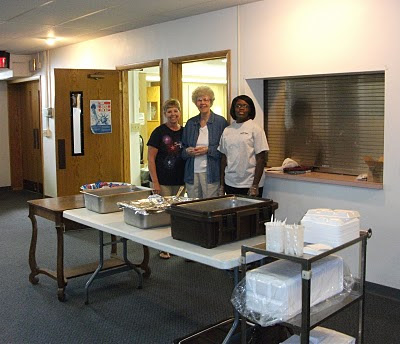 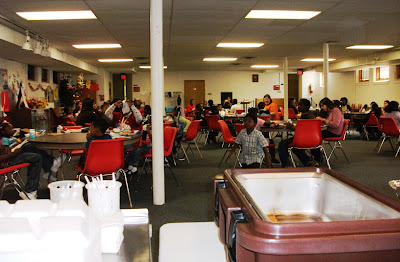 During the two week hiatus for the Rock Island Schools, called the ‘intersession,” we are serving lunch to children here at the Church of Peace. Today was a busy day. Since the kitchen prepared seventy five pieces of pizza and there were still two left, we believe we served lunch to 73 children today! 34 of those children were from the Academy down the street. So that means that 41 neighborhood children were able to attend on their own. (It is hard to get a picture of the crowd with my little camera.)

Here are the three food servers: Nora, Corinne and Tenisha.

On a sad note: We were also scheduled to serve food over at Century Woods apartments, formerly known as Arsenal Courts, during this intersession. We had served up to seventy children per day last summer. The families that live in those apartments have a lot of children. Last Friday, sort of at the last minute, the administration from Century Woods called the church to tell us that we could not serve food at their facility. It turns out that the kids are too messy and too pesky – said they kept coming early to the community room. To me this suggests that the children are bored and hungry. But the administration did not want to be bothered with the children. So no lunch there.