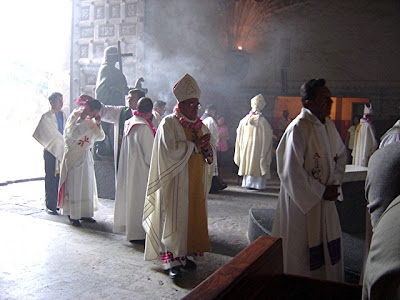 In February 2007 a group of United Church of Christ pastors was in Cuernavaca, Mexico to meet with the leadership team from a Mexican Civil Association (non-profit corporation) named INESIN. And who should we run into but Bishop Samuel Ruiz Garcia, who was the instigator in setting up INESIN years before. The bishop had suggested to Rev. Paula Bidle, and her husband, Bud Moore, that it would be a good idea to help establish an ecumenical center where Catholics and Protestants could meet together to work on common issues. Bud and Paula were UCC missionaries in Chiapas at that time, and INESIN was a 12 year old reality in 2007.

Ruiz was in Cuernavaca to be part of an special service in the cathedral to honor Sergio Mendez Arceo, who had been bishop in Curernavaca from 1952-1983. 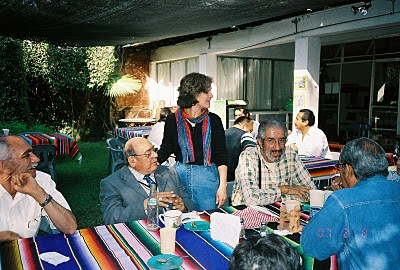 Lo and behold, Bishop Ruiz was attending a dinner before the service at CCIDD, which is the center where we were meeting with our partners from INESIN. Small world. Here is Paula Bidle with Bishop Ruiz in the garden. 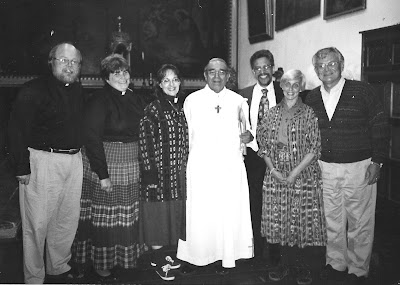 The United Church of Christ had been working in partnership with Bishop Ruiz and with the Diocese of San Cristobal de las Casas since the 1980s. This partnership was to aid the Guatemalan refugees who fled the scorched earth policy of the the Guatemalan military, and had fled north across the border into Mexico. The partnership helped provide material aid, medicine, and accompaniment for these refugees.
Bishop Ruiz, who had been made bishop by Pope John XXIII, and who had attended the Second Vatican Council, was unusual in that he regarded Protestants like us as potential partners in mission.
I first met him in person in January 1994, just after the Zapatista Uprising, when on a church delegation from the United Church of Christ. The curia (diocese offices) was buzzing with international press and lots of activity and he welcomed our group. I was impressed.
The black and white photo above is another delegation from the UCC meeting with Ruiz before a service in the Cathedral in San Cristobal. I think it was snapped in about 1997. There has been a fairly continuous relationship with the United Church of Christ and San Cristobal from 1982 to the present.
Bishop Ruiz simply had a wider vision than most people. He embraced the indigenous, Mayan people of his diocese, and was loved by them in return. He saw to it that catechists and deacons were deployed to address their spiritual and other needs.
He saw the United Church of Christ pastors as potential allies in doing the work of God in the area. He urged us in our efforts, and we were happy to be partners.
He inspired groups to work together to do worthwhile things. It was his vision to begin INESIN, and after getting things rolling this little ecumenical gathering spot has continued on a journey of peace making. I think of this as spiritual leadership at its best.
Ruiz was also a warm and caring individual. He had a pastor’s heart. 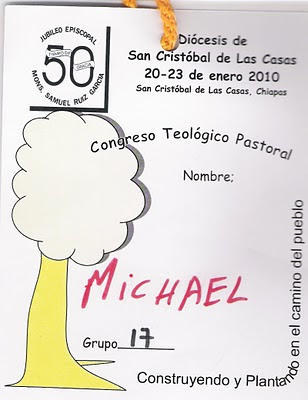 The last time I saw him, from a distance, was at a celebration in January 2010 to mark the 50th Anniversary of his ordination. He used this moment to bring together people from around the world for a conference on Pastoral Theology, and to pass the torch, in a way, to the next generation. All this took place in San Cristobal. One could see that he was not in good health, but he continued to serve right to the end.
Below is the notice from the BBC about his death on January 24, 2011:

The Mexican bishop and indigenous rights campaigner, Samuel Ruiz Garcia, has died at the age of the 86. He passed away in hospital in Mexico City from complications arising from respiratory problems and diabetes.
Samuel Ruiz served as bishop of San Cristobal de las Casas in the southern state of Chiapas for four decades.

He was best known for his role as mediator in the conflict with Zapatista rebels, and was nominated for the Nobel Peace prize several times. President Felipe Calderon said his death was a “big loss” for Mexico. “Samuel Ruiz worked to build a fairer, more equal, more dignified Mexico without discrimination, where indigenous communities have a voice and where their rights are respected by all,” Mr Calderon said in a statement.

Bishop Ruiz led the diocese of San Cristobal de las Casas from 1959 to 2000, when he stepped aside on reaching the retirement age of 75.
Inspired by the liberation theology that swept the Roman Catholic Church in Latin America in the 1960s, he was an outspoken advocate for the rights of the indigenous Maya people of Chiapas, who are among Mexico’s poorest and marginalized communities. His followers knew him as “The Bishop of the Poor” or simply as “Jtatic” – father in the Tzotzil Maya language.
Peace broker
On 1 January 1994 Chiapas saw a shortlived armed uprising by a previously unknown rebel group, the Zapatista National Liberation Army (EZLN), which said it was fighting for indigenous rights. Bishop Ruiz was chosen to mediate between the government and the rebels. In 1998 he was pressurized to resign as mediator by the government, amid allegations that he was too sympathetic to the Zapatistas, but the uneasy truce he helped to establish in Chiapas has held ever since.
Bishop Ruiz was also criticised by conservatives in the Church who saw him as too influenced by left-wing political ideas and too flexible in his approach to indigenous religious practices that combined Catholicism with traditional Maya beliefs. The conflict in Chiapas raised his international profile, and he became a widely-respected advocate of indigenous rights throughout Latin America.
One of his legacies is the Father Bartolome de las Casas Human Rights Centre, which he founded in 1989.The organisation is named, like the diocese Bishop Ruiz represented, after a 16th Century Spanish priest and defender of indigenous rights.